Discovery and development of Pd-catalyzed cross-coupling reactions greatly spurred the rise of medicinal chemistry. They also strongly biased the chemical space of potential drugs to biaryl-like compounds. Currently, directed by growing demand for chemical diversity, the field is evolving in the direction of more flexible chemotypes, where rigid scaffolds are connected via single Csp3-Csp3 bonds.

The most straightforward way to introduce sp3-hybridized carbon with Pd-catalyzed cross-coupling is to use the corresponding reactant (e.g., alkylboronic acid derivatives). But it’s not that exciting and there are certain problems with secondary and tertiary alkyl derivatives.

James Morken group from Boston college published a different approach to that problem. Their paper describes a nice combination of Suzuki coupling with 1,2-metallate rearrangement. As a result, the group developed a general 2-step methodology of Pd-catalyzed tethering of two fragments via flexible ethylene linker with a chiral center.

In general, the reaction scheme is pretty neat, and seems suspiciously easy. Even the ligand for in-situ formed catalyst L1, which has a commercial name MandyPhos (probably named in honor of a person who prepared it first), looks not too scary (although can be pricey): 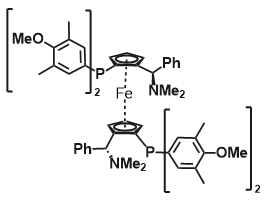 Some operational difficulty comes from sensitivity of the reaction to halide anions.

[…] we found that the presence of lithium halide salts […] markedly erodes conjunctive coupling efficiency. […] it is critical that halide-free vinyllithium be used. To prepare this reagent, we developed a procedure that involved lithium-halogen exchange with n-BuLi in hexane, followed by low-temperature recrystallization of pure vinyllithium.

In fact SI says that they did triple recrystallization of vinyllithium from diethyl ether. So the procedure does require some mojo if you want to be a perfectionist (otherwise, just increase the catalyst loading from 2% to 5%, the authors say).

Maybe the reported scope of the reaction won’t impress a medicinal chemist (where are heterocycles, basic amines and amides?). But what I find the coolest about the procedure is that the end product is another boronate ester. So one can run for example a Suzuki coupling on it. Or if one adds some more vinyl lithium … the process can go on and on!

Where Ar can be also substituted vinyl group. And one can then do some methathesis on them or reductive ozonolysis or… implications are pretty much endless, as is the chemical space. Really beautiful stuff!

I did my PhD in medicinal chemistry/chemical biology of G protein-coupled receptors and then explored some chemical biology of non-coding RNA as a postdoc. Currently I'm working in a small biotech company in San-Francisco Bay area as a research chemist. I'm writing about science, which catches my attention in rss feed reader and some random thoughts or tutorials. View all posts by Slava Bernat

3 thoughts on “The birth of Morken reaction”

The blog of Marshall Brennan, PhD

synthetic procedures I tried and liked